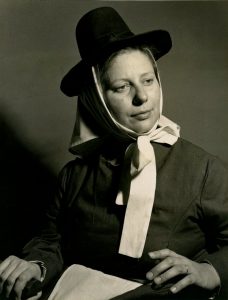 Sadie Lou Tieri (1917-2000) was an actor, playwright and director. From Dallas Texas, she began her dramatic career at age 3, and went on to star in Old Globe Theatre productions, write and direct musical dramas and become a founding member of San Diego Junior Theatre.

Associated with the San Diego Community Theater group, Tieri appeared in the 1950 Old Globe productions of The Taming of the Shrew and Romeo and Juliet, with Jackson Woolley.

In 1950, she directed two short one-acts by local playwrights, in a community outreach program sponsored by the San Diego Park and Recreation Department. The productions toured local playgrounds, and mobile sets were transported venue-to-venue by truck.

The Junior Theatre shows were The Three Golden Leaves, by Carroll Rice, and The Lone Name, by Genevive Turnac.

Sadie Lou was nominated for an Atlas Award for her role as Cornelia in The Bat (1951), and won Best Actress award for her portrayal as Countess Aurelia in the Old Globe’s production of Madwoman of Chaillot (1952).

Tieri left the limelight in the 1950s to raise two adopted sons. She resurfaced more than a decade later, this time behind the scenes. She directed and wrote musical adaptations of The Drunkard and The Road to Rainbow for San Dieguito Little Theater.

In 1981, her adaptation of Wycherley’s A Country Wife evolved into the musical Oh, Henry, Oh at the Marquis Public Theater in San Diego.

In Charlotte Chorpenning’s 1946 version of Little Red Riding Hood, a young Wolf who thinks he’s smarter than men plots make them all his servants.

San Diego Junior Theatre's 1950 production of Black Bart, the Lone Robber of Calaveras and an Olio

Can a Princess win back her kingdom from creatures of an ominous Black Wizard? Three golden leaves from a magic tree will tell, in this magical tale.