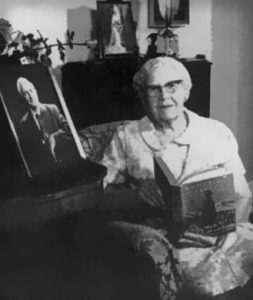 Melcena Burns Denny (1876–1974), poet, writer, lyricist and playwright, was born in California and graduated from San Jose State Teachers College. She was a member of the San Diego Writers’ Club, the Authors’ League of America, and the Dramatists’ Guild. Before marriage she wrote under the name L.M. Burns and sold her first story at age 22. Denny later moved to Seattle with her husband Robert Roy Denny, the first Vice President of Rotary International.

In addition to her short stories and poems purchased by Collier’s, Woman’s Home Companion, and Youth’s Companion magazines, Denny was the author of two plays, Black Bart, The Lone Robber of Calaveras and Lola Montez, The Spider Dancer; and books White Stars of Freedom and The Book of My Baby Mine.

Black Bart, The Lone Robber of Calaveras was first performed at California's First Theatre by the Troupers of the Gold Coast in 1946, then at the Balboa Park Puppet Theatre in San Diego by the Junior Theatre Summer Workshop in 1950, and finally in 1961 by the Triangle Club at the three-day Apple Festival in Julian, California.

San Diego Junior Theatre's 1950 production of Black Bart, the Lone Robber of Calaveras and an Olio