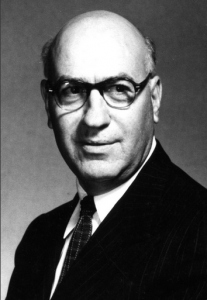 Edward Kingsley Povenmire (1904-1993) was born in Laurelville, Ohio. He received a bachelor’s degree in education from Ohio State University and an MFA degree from Yale in 1940, and studied for an additional year at Garrett Biblical Institute.

‘King’ Povenmire joined the theatre faculty at San Diego State College in 1946 and received the Distinguished Professor Award in 1969.

He is best known for directing the Sand Diego State College Verse Choir of 20 speaking voices, providing programs for the campus and community.

After retiring in 1971, Povenmire wrote a book, Choral Speaking and the Verse Choir, and two plays, Command the Morning and Buttered-Side Down, both of which were produced and performed in the San Diego area. He also served as a speech consultant for General Dynamics, SeaWorld, KPBS-TV, and various churches.

In Charlotte Chorpenning’s 1946 version of Little Red Riding Hood, a young Wolf who thinks he’s smarter than men plots make them all his servants.

The magical story of Mary Poppins comes to life!