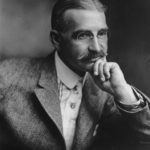 Lyman Frank Baum (1856–1919) was a children's book writer who created the popular Wizard of Oz series.

In 1897, Baum published his first collection for young readers Mother Goose in Prose, which was illustrated by Maxfield Parish. His first best-selling children's book was 1899's Father Goose, His Book.

The following year, Baum scored an even bigger hit with The Wonderful Wizard of Oz, and went on to write 13 more Oz books before his death in 1919. Ruth Plumly Thompson continued to write the series after his death.

The San Diego Connection
In 1904, Baum first vacationed at the Hotel del Coronado and wintered in Coronado for six more years. While staying at the hotel, not only did Baum enjoy the sunshine, but there he also wrote some of his Oz books! He claimed that he wrote his best stuff in “the sunny clime of Coronado.”

L. Frank Baum's historic Coronado home is a quaint yellow house that he rented during his stays. This is where he wrote three books in the Oz series: Dorothy and the Wizard of Oz, The Emerald City of Oz and The Road to Oz. Baum also wrote sections of The Marvelous Land of Oz while staying in Coronado.

Dorothy's adventures in the marvelous Land of Oz.