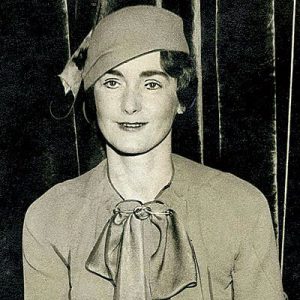 Elizabeth Fuller Goodspeed (1893-1979) was an American socialite, patron of the arts and writer.

Born Elizabeth Fuller in 1893 in Evanston, Illinois, “Bobsy” was educated in Paris at the Villa Dupont, a boarding school for American girls. She received an education in art and literature and remained in Paris until she was 20 years old. She continued her studies at the Art Institute of Chicago. After graduating in 1914, Elizabeth became active in several local women's organizations, acted and danced in local productions, and made regular appearances in Chicago's society pages.

In 1916, Elizabeth married Charles Goodspeed, a trustee of the University of Chicago. The couple maintained a high profile in the city, hosted popular parties at the Lincoln Park apartment, and traveled often.

1n 1928 she adapted The Wizard of Oz for the stage as a three-act play.

In 1934, Elizabeth invited Gertrude Stein and Alice B. Toklas to Chicago, an invitation that spawned Stein's strong relationship with Chicago. Stein and Toklas stayed at the Goodspeeds' apartment during their stays and it was at one of their parties that Stein was introduced to Thornton Wilder. The two remained friends until Stein's death. Throughout the 1930s, Elizabeth made trips to Paris, where she spent time with notable artists, writers, dancers, philosophers, and gallerists. An amateur film maker, Elizabeth sometimes filmed her visits to Paris and her parties in Chicago.