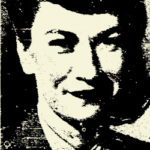 She was married to William “Bill” C. De Lannoy (1915-1993), who was also heavily involved in San Diego theatre. William had an MA in theater arts from USC, taught drama at San Diego High School and San Diego Junior College, and acted at the Old Globe.

During 1945-1947, Lois and her sister Beth Masterson, a local elementary school teacher, produced and directed the first Children’s Theater productions in Balboa Park, under the auspices of the San Diego Park and Recreation Department.

Lois and Bill De Lannoy, Robert and Gini Landis, and Norman Johnson together founded the Footlights Theatre in 1947. Footlights produced seven shows a year, for seven years, in the Roosevelt Junior High School Auditorium. For a while, it was the only local theater in San Diego. Much of Balboa Park and the Old Globe Theatre had been requisitioned by the Navy during the war years.

Throughout the years, Lois authored several publications on teaching, including Guide for teaching beginning phonics: second-grade level, and Drama for the elementary classroom: guide-lines to accompany the state drama/theatre framework.