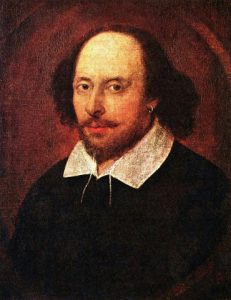 William Shakespeare (c1564-1616) was an English poet, playwright and actor, and is today widely considered the greatest dramatist of all time.

William Shakespeare was baptized in 1564 at Stratford-upon-Avon, England. In 1582, he married Anne Hathaway at the age of 18. In 1583, William’s first child, Susanna was born. In 1585, he had twins, Hamlet and Judith. Between 1589 and 1590, William is believed to have written his first play, Henry VIII (part I). The next year, he completed the second part of the play.

By 1592, Shakespeare had begun a career as a playwright in London. Two years later, he was an actor and part-owner of a playwright company, Lord Chamberlain’s Men. The company was successful and was adopted by King James I. It was then renamed The King’s Men. By this time, William was well-known throughout the London theater world. In 1594, historians believe he wrote The Taming of the Shrew, a famous comedy in which a character named Petruchio wins a bet for having the most “obedient” wife. The next year, in 1595, William wrote some of his most famous stories including A Midsummer’s Night Dream and Romeo and Juliet. In 1596, Shakespeare wrote The Merchant of Venice. After writing Julius Caesar in 1599, Shakespeare is thought to have written Hamlet, historically thought of as his greatest masterpiece. He wrote several other timeless classics such as Macbeth, Othello, and The Tempest.

Many of his plays were performed by his production company at royal courts and at prestigious theaters. Shakespeare died in 1616 at the age of 52.

A comedy about a cross-dressing, ship-wreck surviving, poetry-loving girl who finds herself at the center of a love triangle.

The game playing and plotting of a noble family leads to fun, intrigue, and misunderstandings... all in the name of true love.

The Tempest is set on a remote island that draws on the themes of magic, illusion, and music.

The tragic story of how prejudice and hatred can destroy life, but not love.