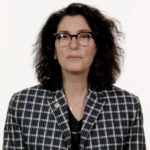 Tina Landau is a writer and director whose work has been produced on Broadway and Off-, internationally and regionally, and most frequently at Steppenwolf Theatre in Chicago, where she is an ensemble member. Known for her original, large-scale musical and ensemble work, Tina has been recognized by the Tony Awards, Drama Desks, Drama League, Outer Critics, Lucille Lortel and Obies, and is a recipient of a United States Artist Fellowship, the Princess Grace Statuette, a NEA/TCG Directing Fellowship and Rockefeller and Pew grants.

On Broadway, Tina has directed SpongeBob Squarepants: The Broadway Musical, Tracy Lett’s Superior Donuts and the revival of Bells Are Ringing. Her Off-Broadway productions include Bill Irwin/David Shiner’s Old Hats, Chuck Mee’s Big Love and Iphigenia 2.0, all at the Signature; Tarell McCraney’s Head of Passes (also Steppenwolf, Berkeley Rep, Mark Taper Forum, NAACP Best Director) and In the Red and Brown Water, both at the Public Theater; Paula Vogel’s A Civil War Christmas at NYTW; McCraney’s Wig Out! and her original musical Dream True written with Ricky Ian Gordon, both at the Vineyard; her musical Floyd Collins, written with Adam Guettel, at Playwrights Horizons, the Old Globe and the Goodman.

The stakes are higher than ever in this dynamic stage musical, as SpongeBob and all of Bikini Bottom face the end of their undersea world.