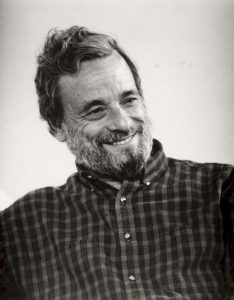 Stephen Joshua Sondheim is an American composer and lyricist known for more than a half-century of contributions to musical theatre. Sondheim has received an Academy Award, eight Tony Awards (more than any other composer, including a Special Tony Award for Lifetime Achievement in the Theatre), eight Grammy Awards, a Pulitzer Prize, the Laurence Olivier Award, and a 2015 Presidential Medal of Freedom. His best-known works as composer and lyricist include A Funny Thing Happened on the Way to the Forum, Company, Follies, A Little Night Music, Sweeney Todd, Sunday in the Park with George, and Into the Woods. He wrote the lyrics for West Side Story and Gypsy.

Sondheim has also written film music, contributing “Goodbye for Now” to Warren Beatty's 1981 Reds. He wrote five songs for 1990's Dick Tracy, including “Sooner or Later (I Always Get My Man)” by Madonna, which won the Academy Award for Best Song.

The composer was president of the Dramatists Guild from 1973 to 1981. To celebrate his 80th birthday, the former Henry Miller's Theatre was renamed the Stephen Sondheim Theatre on September 15, 2010, and the BBC Proms held a concert in his honor. Cameron Mackintosh has called Sondheim “possibly the greatest lyricist ever.”

Idealistic lovers, Tony and Maria, find themselves caught between warring street gangs, the Jets and the Sharks.

A dark and witty steampunk tale of London, love, murder, and revenge.