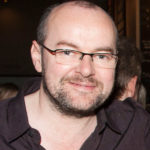 For film he wrote the screenplay for Black Sea, directed by Kevin MacDonald.