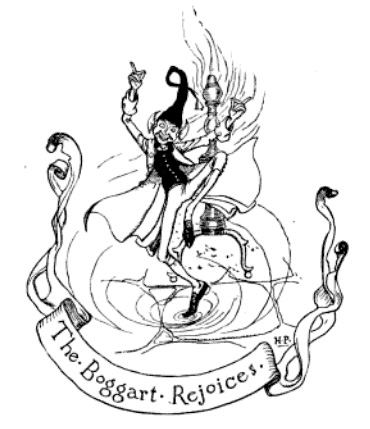 “Did you ever hear of a boggart? No! Then I will tell you. A boggart is a small imp that lives in a man’s house, unseen by any one, doing a little good and much harm...”

Mrs Richard Billingsley directed her 8 and 9 year-old students from the Summer Drama Workshop, under the supervision of program director Mary Corrigan. Farmer Grigg’s Boggart was performed at 17 city playground areas, with flexible sets transported from venue-to-venue by truck.

Farmer Grigg’s Boggart, a Play in Two Acts, adapted for the stage by Mary Thurman Pyle, from the childern’s story written and illustrated by Howard Pyle. Presented by special permission from Row-Peterson, Evanston, IL. Production sponsored in part by the San Diego Community Theater, the City of San Diego Park and Recreation Department, and the City of San Diego.