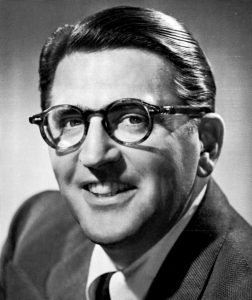 Robert Meredith Willson (1902-1984) was an American composer, songwriter, flutist, conductor and playwright, best known for writing the book, music and lyrics for the hit Broadway musical The Music Man. He wrote three other Broadway musicals, composed symphonies and popular songs, and his film scores were twice nominated for Academy Awards.

Meredith Willson was born in Mason City, Iowa on May 18, 1902 He learned to play piccolo and flute while still in high school. In 1919, at age 17, he enrolled in New York’s Institute of Musical Art, where he studied the flute under Georges Barrere, Henry Hadley, Mortimer Wilson, Bernard Wagenaar and Julius Gold.

Between 1921 and 1923, he toured the U.S., Cuba, and Mexico as the flutist with John Phillip Sousa’s Band. In 1924, he worked briefly in New York’s Rialto theater orchestra, under the leadership of Hugo Riesenfeld. From late 1924 to 1929 he was flutist in the New York Philharmonic Orchestra and the New York Chamber Music Society.

After serving as a Major in World War II, Willson returned to the States and continued songwriting while concurrently working as music director of ABC radio and television networks.

Throughout his diverse career, Wilson contributed scores and librettos to several Broadway scores including The Music Man, which earned him the New York Drama Critics, Tony and Grammy awards in 1958, The Unsinkable Molly Brown and Here’s Love.

Acting as lyricist and composer for most of his career, Willson wrote memorable standards including “It’s Beginning to Look Like Christmas”, “My the Good Lord Bless and Keep You”, “You and I”, “Two in Love”, “76 Trombones”, “Goodnight, My Someone”, “Till There Was You”, “Trouble”, “My White Knight”, “Lida Rose”, “I Ain’t Down Yet”, “Belly Up to the Bar, Boys”, “The Big Clown Balloons”, “Pine Cones and Holly Berries”, “My Wish”, “Iowa Fight Song”, “I See the Moon”, “Ask Not” and “Symphonic Variations on an American Theme.”

There's trouble in River City when a fast-talking salesman gets his heart stolen by the town librarian.

There's trouble in River City when a fast-talking salesman gets his heart stolen by the town librarian.