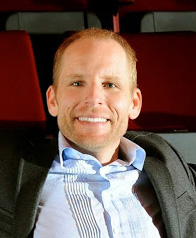 Joey Landwehr is the proud Artistic Director for JCompany Youth Theatre. Winning over 40 awards for his work with young artists in San Diego; including a special creativity award for shaving his head with his lead in The King and I, Yul Brynner style, gaining over $10,000.00 for Rady Children’s Hospital Cancer Unit. Earning him the title Joey “Do Anything For The Arts” Landwehr.

Since moving to San Diego, Joey worked for the San Diego Performing Arts League as Membership and Community Development Director; in 2007 he received the 40 Under 40 Award from San Diego Metropolitan Magazine for outstanding leadership in the arts. Joey was also honored as the 2011 Newsmaker in the Arts and in 2013 was honored again for his work in the arts by the San Diego Union Tribune.

At JCompany he has had the privilege of directing Rumpelstiltskin Is My Name, Oliver!, Disney’s Beauty and the Beast, The Story Of Hansel and Gretel, Disney’s The Jungle Book, Aida, Disney’s 101 Dalmatians, Pocahontas (San Diego Premiere), Into the Woods, Fireflies: The Story of the Artists of Terezin. South Pacific, The King and I, The Sound of Music, Cinderella, Fiddler on the Roof, 13 – A New Musical, The Wizard of Oz (Munchkin cast of the national tour), Children of Eden, Disney’s Mulan, The Who’s Tommy, Thoroughly Modern Millie, Xanadu, Funny Girl, Yentl (World Premiere), Gypsy, Hello Dolly, Shrek The Musical, Disney’s The Little Mermaid, Disney’s Tarzan, Disney’s Peter Pan, Pirates of Penzance, Annie, and West Side Story.

It’s the Comic Strip story of the Peanuts with Charlie Brown and the gang!

All of the characters (human and animal) we've come to love through the stories of Hugh Lofting and the magical movie musical are given new life in this stage version.

Travel back to the legendary, story-telling days of ancient China with this action-packed stage adaptation of Disney’s popular movie.