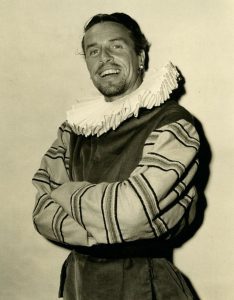 Artist, actor, and teacher, Jackson H. Woolley (1910-1992), a native of Pittsburgh, studied drama at Carnegie-Mellon University before coming to San Diego in 1935 as a member of the original Shakespearean company that opened the Old Globe Theatre during the California Pacific International Exposition in Balboa Park.

He lived in Point Loma with parents Clarence and Minnie, becoming a drama teacher at Francis Parker School, where he met art teacher Ellamarie Packard (1913-1976). A San Diego native who studied art at San Diego State University, her father Phineas S. Packard founded the Arts and Crafts Press in San Diego.Jackson and Ellamarie Woolley married in 1940.

After World War II service as an Army captain, Mr. Woolley and his wife began an artistic collaboration that lasted until her death in 1976 and brought them international recognition. They began making small enameled copper objects — bowls, plates, etc. Next they made plaques using cubist and abstract motifs, and, as their skill grew, they created light fixtures and doors for modernist residences.

He performed opposite fellow Junior Theatre director Donna Woodruff in Taming of the Shrew (1950). Later, Jackson directed a number of local productions for the Old Globe Theatre and San Diego Junior Theatre.

In the 1960s, this accomplished husband and wife team received several commissions to make public art. Beside their work for the Civic Theatre, they produced a number of pieces for buildings in Southern California, among which were “Bibliocosmos,” a 144-square foot mural for the Fresno County Free Library and “Pacificana,” a ten-foot by 24-foot plaque for the Pacific Employers Group Insurance Building in Los Angeles.