Celebrating the Essence of Junior Theatre 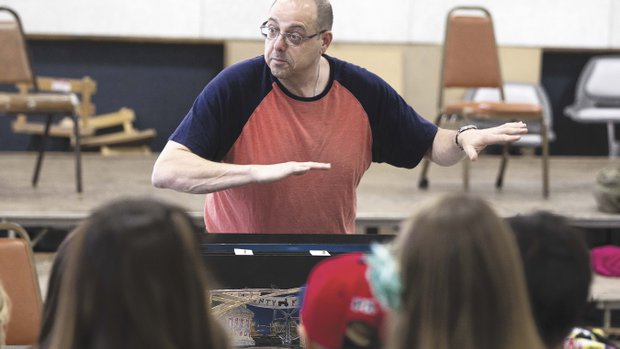 San Diego Junior Theatre executive director James Saba is not ignoring the Balboa Park Centennial Celebration.
The organization, along with the San Diego Civic Youth Ballet and the San Diego Youth Symphony and Conservatory, just received a $10,000 grant from the National Endowment for the Arts to create an exhibit at the Casa del Prado Theatre to showcase the history of the three youth-oriented institutions and the San Diego Civic Dance Arts in Balboa Park.
It’s just that Saba and the 67-year-old Junior Theatre have a more important anniversary to celebrate.
Junior Theatre veteran production manager Tony Cucuzzella has been with the institution exactly 20 years.
“He’s not your typical person who works with kids,” said Saba, the Junior Theatre’s executive director since 2013. “Yet every kid who comes through here has a deep admiration for Tony. He’s a big constant. There’s someone who is here when we open the doors to the time we shut them, and that’s Tony.”
Cucuzzella’s anniversary is significant because he embodies the spirit and values that are Junior Theatre. Certainly the institution, which touts itself as the oldest youth theater in the U.S., has grown over the decades. It now serves thousands of kids, offers hundreds of classes, and presents 10 main-stage productions on a budget in excess of $1 million. And its successful alumni, whether in the New York theater scene or outside of theater, attest to the efficacy and professionalism of its programs.
But somehow, like Cucuzzella — who is also a designer, playwright and has directed and acted as well — the organization has maintained a certain can-do, let’s-put-on-a-show flavor.
“What Junior Theatre does more than anything — and it’s not about making kids into stars — is build self-confidence and give kids tools so they can be successful no matter what they go forward with in life,” Cucuzzella said. “We teach them how working as a group is how you make something happen. It happens to be a show, but you can take those tools and apply them to anything outside of theater.”
As you would expect from Junior Theatre, the celebration won’t be over the top. Junior Theatre families are going to honor Cucuzzella with a picnic, and it’s likely he will be sharing a cake or two with students during the year. The theater will also place a plaque on one of the seats in the Casa del Prado Theatre in his honor.
“The thing is, the centennial begs to be celebrated and Tony does not,” Saba said. “We want to make sure we sneak in this year as much as we can to show how much we appreciate him.” Sense of belonging
Saba knows exactly what Cucuzzella is talking about in the self-confidence category.
While still a student at Grant Elementary, an uncertain, 10-year-old Saba joined Junior Theatre in 1977. The company, which was created in 1948 at the Old Globe (at that time the San Diego Community Theater), then operated under the auspices of the city of San Diego, as did the Civic Youth Ballet and the Youth Symphony.
“I remember the first rehearsal I had in here,” said Saba, during a recent interview in the Casa del Prado Theatre. “I was right in front, near where I am right now, and I was looking out into the theater and I was learning choreography and I was like, ‘Oh my God, oh my God, this is amazing, this is amazing — I’ve finally found a place for me.’ ”
The production was “Tom Sawyer,” and one of the company members was Christian Hoff, now a Tony Award-winning Broadway star with credits that include “The Who’s Tommy” and “Jersey Boys.”
“There were a whole slew of people involved, and I bet I’ve kept in touch with 50 percent of that group,” Saba said. “I mean, really in touch. That was the introduction to the group I would grow up with in life. We would get together and share our milestone moments, and we continue to do so.”
Saba left Junior Theatre in 1984, the same year the theater became an independent, nonprofit institution, as did the Youth Symphony and Youth Ballet (although the city continues to support the three organizations by providing space for them in the Casa del Prado). He attended Southern Methodist University in Texas as a theater major before returning to Southern California, where he was active in San Diego and Los Angeles theater and TV. But he couldn’t escape Junior Theatre.
He came back to help in the early ’90s as interim director during a rough patch for the theater, and left for points east just before Cucuzzella’s arrival. Cucuzzella was called in to rescue a production of “Romeo and Juliet” and welcomed the opportunity of a stable job, an all-too-rare occurrence in the theater. “I started literally during tech week, and I was like, ‘OK, kids doing theater, and kids doing Shakespeare, that’s going to be interesting,’ ” Cucuzzella said.
“I was trying to learn the show and solve some problems backstage, and I remember suddenly just stopping and listening to what was happening onstage: Here was a 13-year-old Romeo and a 16-year-old Juliet, and they knew what they were saying, they had a command of the language, and the level of the performance they were giving just impressed me so much.
“The kids still, not surprise me, that’s not the right word, but they continually reach a level and beyond that we’ve set for them. It’s amazing to watch.”
Junior Theatre spirit
While Cucuzzella found his calling at Junior Theatre, Saba was freelancing as an actor and director on the East Coast and working with the Hope Summer Repertory Theatre at Hope College in Michigan. He was thinking about settling down when he heard about an opening for executive director at Junior Theatre.
“What I was thinking in coming here is there’s no place that is in the marrow of my bones more than this organization,” Saba said. But he was apprehensive about whether Junior Theatre had changed too much in his absence.
“When I was here before, it was a patchwork of all different kinds of kids, with all different backgrounds,” he said. “I don’t know how we ever found each other in the same room because we were only united by our love of theater and the arts. We were all kind of misfits elsewhere.”
“And I thought, ‘If it’s not that same spirit, I think I’m going to have a harder time working for the place.’ Because some organizations such as ours can get kind of (pageant-like). It’s very much about being the little star with a bun on your head and an ‘Annie’ voice and that type of thing. And Junior Theatre was never like that.”
When he returned, he found the Junior Theatre spirit in people like Cucuzzella and the students, who oddly resembled his younger self and his colleagues. Some were children of students Saba had worked with two decades ago.
“I thought, if I can’t raise money for this, I can’t raise money for anything,” said Saba. “I am a walking poster child for my cause, which is Junior Theatre.
“It’s my life, and it changed my life significantly. I want to make sure I’m part of that change in other kids.”
Read More…