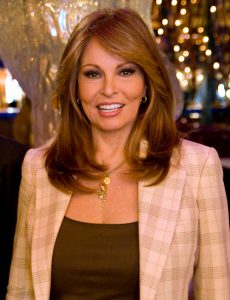 At seven years old, one of Tejada's first roles was in A Christmas for Olga, a holiday play put on by the Mission Beach Women’s Club juniors.

She always wanted to be an actress, so her mother enrolled her in San Diego Junior Theatre. At twelve years old, she performed in the touring production of The Princess Who Disappeared (1952).

While a freshman at La Jolla High School, she appeared in San Diego Junior Theatre’s Curtain Going Up! (1954).

She was crowned “Fairest of the Fair,” the San Diego County Fair beauty pageant, in 1958. That same year, she appeared in Bullfight, a Drury Lane Theatre production in La Jolla.

Miss Tejada graduated from high school in 1958 and a year later married her high school sweetheart, James Welch. She had two children with Welch, and is today known by her married name, Raquel Welch.

Seeking an acting career, she attended classes at San Diego State College, and was briefly a weather forecaster at KFMB TV in San Diego.

Small bits on television grew to motion picture parts. Her breakout role was in Fantastic Voyage (1966), which was a hit and made her a star. Welch’s role in One Million Years BC (1966) made her a superstar.

Other memorable roles include Bandolero! with James Stewart and Dean Martin, Myra Breckinridge, The Three Musketeers,(1975 Golden Globe winner) The Four Musketeers and The Wild Party.

So many comic obstacles face Miss Burgess in producing her first play at high school.

The Wicked Witch turns Baby Princess into a caterpillar! Will Prince Charming free her?